Louie La Vella on How To Craft A Magnetic Personal Brand
John McIntyre
18 January at 08:00 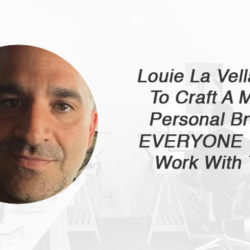 Louie’s works in the music industry, where he helps artists, musicians and record labels sell more music and get more fans.

Well, it turns out that Louie uses a lot of strategies and tactics that I use.

He’s big on personal branding and encourages his clients to ALWAYS tell an engaging story that magnetically attracts fans, customers and clients to your door. He has also produced over 40 live music events, and has worked as the Marketing Director for 5 festivals.

In other words, Louie’s been around the “marketing block” a few times and has plenty of hard-won wisdom to share.

And since he’s outside the “internet marketing bubble”, Louie brings a fresh perspective on what we can all do to grow our businesses and make more money.

The “internet marketing world” is quite small, and if you’ve been to a few conferences, you’ve probably bumped into the same people.

In many ways, it’s great. But in other ways, it’s dangerous, because it leads “intellectual in-breeding” and stale, stagnant ideas. That’s why it’s important to look outside the internet marketing industry once in a while, to get a breath of fresh air, see things in a new light, and come back with killer ideas that no one has thought of yet.

So listen in, breathe the fresh air and discover Louie’s secret strategies for building a magnetic personal brand so that EVERYONE wants to work with YOU.

In this interview with Louie La Vella, you’ll discover:

How To Become A Copywriter In 2021 (With NO Experience Or Portfolio)
What Richard Branson And 30 Amazing Entrepreneurs Taught Me In 7 Days on Necker Island
Drip Review: ‘Lightweight’ Email Automation That Goes Head-To-Head With The Heavyweights
Write Killer Headlines In 2 Minutes Without Thinking
How To Write Sales Copy
5 Proven Ways To Get More Copywriting Clients In 2021 Than You Can Possibly Handle
Why Your Opt-In Plugin Isn’t Working
How To Write Story-Based Emails (that sell stuff like crazy)
Stop Asking People To Opt-In – It’s Hurting Your Conversions
Ebooks Suck: Why Offering An Ebook Is A BAD Idea